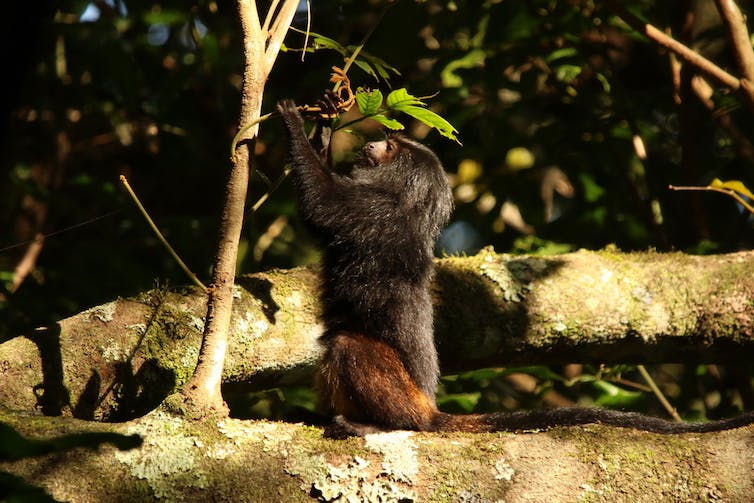 When monkeys use the forest as a pharmacy

Have you ever seen your cat or dog eating grass? They do so because it can help their digestion, and many wild species use natural substances to prevent and control diseases or to repel parasites. This is called “zoopharmacognosy” or, more commonly, animal self-medication.

This practice, which can have prophylactic (intended to prevent disease) or therapeutic (intended to heal it) functions, includes a wide variety of behaviours, such as the consumption of medicinal plants, soil, or the application of substances to the body. For example, many species consume dirt to acquire essential minerals and also facilitate digestion. In mammals, zoopharmacognosy has been observed in elephants, bears, elk and several carnivore species, and it’s especially well known in primates.

At the Laboratory of Primatology of the State University of São Paulo (UNESP) in Brazil, our team studies the behavioural ecology of the black lion tamarin (Leontopithecus chrysopygus), also known as the golden-rumped tamarin. This is a small neotropical primate, endemic to the Brazilian Atlantic forest and currently threatened with extinction.

One part of this project, which is the subject of my PhD, focuses on the study of the physiological and behavioural responses of tamarins to fragmentation and decline in habitat quality.

An expedition to Brazil

In the field, we follow several groups of tamarins within fragments of the Atlantic forest to collect behavioural data and faecal samples for subsequent hormonal analysis. Typically, we woke up at dawn and followed the tamarins from the time they left their sleeping site until they returned to sleep, a little before sunset.

During one of these daily studies, we observed them rubbing their bodies on the trunk of a tree covered with resin. At first we thought that the tamarins were marking their territory, a behaviour that is common in this species. But we soon realised that it was something else. In fact, the individuals in the group were collectively rubbing the area of the trunk from which the resin emanated and were also coating their fur with it. Our first instinct was to record the scene and take samples of the bark and resin to identify the essence of the tree.

When we took the bark sample back to the family that was hosting us during our field campaigns, the hostess immediately recognised the peculiar smell of this tree, which the locals call cabreúva. Indeed, the resin produced has a very woody scent with tones of cinnamon, clove, honey and pine. Our botanical expert later confirmed that it was a species of cabreúva, Myroxylon peruiferum, a tree well known in traditional medicine for its antibiotic, anti-inflammatory and anti-parasitic properties.

The use of this tree by the tamarins was quite intriguing, so we decided to place camera-traps at the foot of the…